You are here: Home / Style / All the Celebrities Who Tested Positive for Covid-19 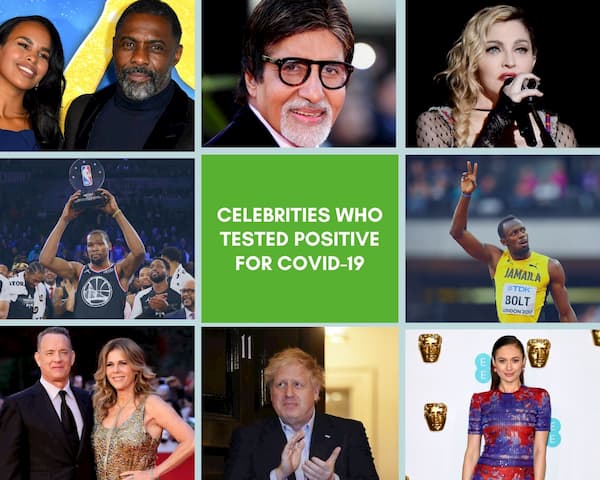 The list of celebrities who tested positive for covid-19 is growing.

With over 30.3 million cases of the novel coronavirus worldwide, celebrities and civilians are equally exposed across the globe so far.

Though it sounds odd, the Queen of Pop, Madonna may be right in calling the coronavirus pandemic “a great equaliser”.

Indeed, the COVID-19 didn’t spare anyone. Starting from common people to celebrities, the virus is spreading at an alarming rate. As a result, the stars (celebrities) are urging their fans (and followers) to self-isolate (and stay safe).

Here’s a big list of some of the well-known Hollywood and Bollywood celebrities, politicians, sports stars, TV industry and business tycoons who tested positive for COVID-19:

One of India’s best-known film stars, Amitabh Bachchan along with his son Abhishek Bachchan tested positive for the virus. Later on, his daughter-in-law (actor Aishwarya Rai Bachchan), and granddaughter Aaradhya Bachchan also had positive tests for COVID-19.

They were shifted to Nanavati Hospital for treatment on July 11th.

Bollywood actress Genelia Deshmukh (Jaane Tu Ya Jaane movie fame) shared her 21-days quarantine experience. Moving to another house, she expressed how tough it was to get locked in a room.

She revealed that no amount of FaceTime and digital immersion can kill the evil of loneliness.

With Unlock 4.0 guidelines, shooting for films resumed and thus Masti-fame actor Aftab Shivdasani resumed shooting for the ZEE5 web-series Poison 2. Now, the 42-year old actor reported that the virus tests results came out positive and he has been advised home quarantine.

Hours after his announcement, his girlfriend model-actor Malaika Arora posted a note that she too tested positive for Covid-19. Currently, both are in-home quarantine.

Yaariyan actor Himansh Kohli reported that he has been advised rest for two weeks. Earlier his family members were tested positive for Covid-19. The actor is best known for his role as Raghav Oberoi in the Hindi soap opera Humse Hai Life.

A day after Bachchans reported that they were corona positive, the verteran actor Anupam Kher revealed that his family were suffering from also tested COVID-19 positive. His mother Dulari Kher, brother Raju, sister-in-law, and neice were admitted to Mumbai’s Kokilaben Hospital.

The epic fantasy hit Baahubali series director S.S. Rajamouli and his family members tested positive for coronavirus. After 2 weeks of quarantine at home, he left a statement that they are waiting to donate plasma.

Known for singing hit numbers like “Baby Doll”, singer Kanika Kapoor is probably the first B-town celeb to get infected with the deadly coronavirus.

“Kasautii Zindagii Kay” fame Parth Samthaan tested positive for Covid-19 when shooting resumed. As soon as the news broke out, the shooting was put on hold.

Bollywood singer-music director Wajid Khan (of Sajid-Wajid duo) died of a cardiac arrest at the age of 42. Initially, he was diagnosed with the novel coronavirus but developed health complications.

Tamil actor Aishwarya Arjun (daughter of popular South Indian actor-director Arjun Sarja) shared the news on her Instagram story. Inspired by her father, she too forayed into films with Pattathu Yaanai starring Vishal.

Born in United States, Rachel White is a model and started her Bollywood journey with Ungli. The actor took to Twitter and shared her quarantine experience.

As part of the Me-Too movement, she came out with allegations against film director Sajid Khan.

Business Tycoons Who Have Been Infected with the New Coronavirus

Top Politicians Who Have Tested Positive for COVID-19

The US President Donald Trump and the First Lady Melania Trump tested positive for the novel coronavirus. Election day November 3rd is just over a month away now. Let’s wait and watch how the White House will have an impact.

India’s former President Pranab Mukherjee has died 21 days after it was confirmed that he got tested positive for the Covid-19. Mukherjee was awarded India’s highest civilian honour, the Bharat Ratna, in 2019.

Following the advice of doctors, the Indian Home Minister Amit Shah has been admitted to AIIMS for post COVID care. Mr. Shah ranks next only PM Modi in real terms.

Till now at least union ministers and 25 MP’s have contracted the novel coronavirus. The latest addition to the list is Road Transport and Highways Minister Nitin Gadkari.

The Joint Secretary in the health ministry Lav Agarwal who used to address national media briefings on the COVID-19 outbreak has tested positive for the coronavirus infection.

The current Chief Minister of Karnataka has recovered completely from Covid-19. Soon after he tested for covid-19, B.S. Yediyurappa was hospitalized in Manipal Hospital.

After spending 11 days in Hospital, Madhya Pradesh CM Shivraj Singh Chouhan was advised to stay in home-quarantine and monitor his health for a week.

Jyotiraditya Scindia (the BJP Rajya Sabha MP from Madhya Pradesh) and his mother Madhavi Raje Scindia got diagnosed with Coronavirus and were admitted to a private hospital in South Delhi.

To the unaware, Mr Scindia left Congress and joined BJP.

None can forget the emotional video where the British Prime Minister thanked the National Health Service for saving his life. In the initial stages, he just reported mild symptoms but thereafter spent 3 days receiving oxygen support.

No other country has been harder hit by the contagion than that of any other Western country. If the reports are to be believed more than 41,000 people died in Britain alone.

Though there were early warnings, the British PM delayed the lockdown and finally the pandemic has stretched everyone.

In a similar tale, the Brazilian President Jair Bolsonaro and the First lady Michelle Bolsonaro tested positive for covid-19. The presidential office issued a statement that she is in good health.

On the other side, Brazil is the world’s second-worst outbreak after the United States. More than 135,000 persons got killed with this deadly coronavirus.

Prince Charles, the 71-year old heir to the British Empire, felt lucky enough as he only suffered from mild symptoms.

In another high-profile case, the wife of Spain’s Prime Minister Pedro Sanchez tested positive for novel coronavirus. Both Begona Gomez and her husband are doing well at their home in Madrid.

Initially, Spain was the second-worst hit nation in Europe after Italy.

The Russian Prime Minister Mikhail Mishustin became the second head of government in the world to get COVID-19 positive. The first being British Prime Minister Boris Johnson. Before admitting himself in the hospital, he named his deputy as the interim prime minister.

After recovering from the covid-19, President Vladimir Putin reinstated him as the Prime Minister of Russia.

After returning from a trip to England, Sophie Gregoire Trudeau tested positive for Covid-19. The Prime Minister’s Office later clarified that PM Justin Trudeau is healthy and doesn’t require any further tests.

To the unaware, Sophie Gregoire first job was a receptionist and assistant at an advertising firm. Later on, she became a television host. And then married to Justin Trudeau.

In the World of Sports, Celebrities Who Tested Positive for Covid-19!

The eight-time Olympic gold medalist Jamaican sprint king Usain Bolt tested positive for the coronavirus. After celebrating his 34th birthday with a mask-free party, the world’s fastest man is now in quarantine.

The Serbian professional tennis player Novak Djokovic tested positive for the novel coronavirus. It seems no social distancing was observed in the exhibition series played during the pandemic.

Since testing positive, both Djokovic and his wife were in isolation.

The Brazilian football icon Neymar tested positive for the virus along with two other players representing PSG. Joining the Paris Saint-Germain club from Barcelona in 2017, Neymar is the most searched football player on Google.

The most talented basketball player Kevin Durant have come in contact with coronavirus. First it was Rudy Gobert, then Donovan Mitchell, Kevin Durant and Marcus Smart have gone public with their positive tests.

The Brooklyn Nets announced that their players are now free of coronavirus symptoms.

Former wrestling superstar (and Hollywood actor) Dwayne Johnson and his family tested positive for novel coronavirus. Through an Instagram video, the Rock requested his fans to wear a mask at all times in fighting the contagion.

The Society and Supergirl actor Olivia Nikkanen tested positive for the virus. The 21-year old Olivia Nikkanen shared her health updates on a regular basis by appearing on Instagram Live.

The Academy-award-winning actor Tom Hanks along with his wife and actress Rita Wilson went through a tougher time battling with the deadly coronavirus.

After recovering from the coronavirus, Tom Hanks is all set to join in the untitled biopic of American musician Elvis Presley in Australia.

The 46-year-old British actor’s film debut and first major role was in Kama Sutra: A Tale of Love.

British actor and filmmaker Idris Elba along with his wife Sabrina Dhowre had contracted coronavirus. The couple updated their health status through social media.

Recently, he has lent his voice to a new song about black men and mental health that will benefit pandemic relief efforts.

Grammy Lifetime Achievement award-winner John Prine dies from coronavirus complications. He was 73. With the sudden onset of COVID-19 symptoms after a European tour, John Prine was placed in intensive care for 13 days.

John Prine was a prolific songwriter and often whimsical performer. He was admired by Bob Dylon for his ability to cover the full spectrum of the human experience.

Ukrainian-French actress and model Olga Kurylenko shared her diagnosis on Instagram. The actor is best known as a Bond girl opposite Daniel Craig in the film Quantum of Solace.  With its international success, Olga Kurylenko was cast in Sci-Fi adventure movie Oblivion opposite Tom Cruise.

The celebrity personal trainer and black belt holder Jillian Michaels revealed that she tested positive for COVID-19 “several weeks ago” while participating in a quarantine circle with friends.

American pop music singer and actress Madonna through the latest edition of her “Quarantine Diaries” revealed that she has been tested positive for coronavirus antibodies.

One of the top pop divas of all time, Madonna denoted $1 million to the Bill & Melinda Gates Foundation to help fund research in developing the vaccine for the deadly virus.