You are here: Home / Education / Indian Laws that Everyone Should Know 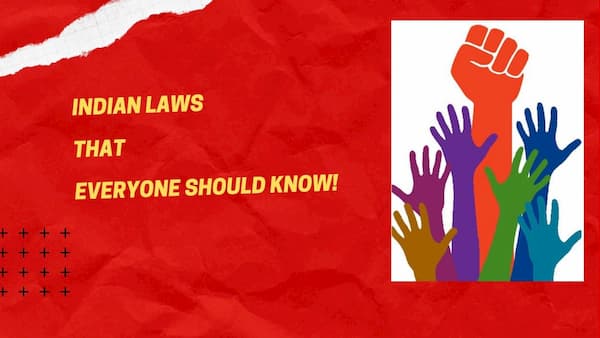 You can’t fight for your rights if you don’t know what they are. Know basic rights and Indian laws that everyone should know.

The Indian constitution itself is the longest written constitution of any country on the earth. Shockingly, there are many loopholes that are being taken for granted. But still, one should not forget that laws are created to safeguard the public.

The Government of India keeps trying to bring new laws and rights to tackle the problems of society. By doing so, it empowers the citizens.

I’m not here to state the 7 Fundamental rights of Indian citizens recognized by Indian constitution. But there are many other good laws and rights that every Indian should know. Regrettably, we are not aware of these good guidelines.

I hereby take extreme pleasure in bring you some interesting Indian laws and rights that every Indian citizen should be aware of.

Kissing & Hugging in Public is Not a Crime

Both the Delhi High Court and the Apex court clarified that that kissing in public is not a criminal offence but a delicate task. The Section 294 (a) of Indian Penal Code states punishment up to 3 months for creating an obscene act in public places.

Interestingly, the word “obscene” remains undefined. The public decency and morality in society is fast changing subject. And thus, the Apex court remarks on the very difficult question of what constitutes obscenity.

Consider FIR registration as a legal right. If you are reporting a crime or any mishappening, no police officer can refuse an FIR registration. If the police deny your request, you can complaint to the nearest judicial magistrate.

Non-registration of an FIR leads to not less than 6 months of imprisonment for the police officials.

In Delhi and NCR region, a woman can file lodge an FIR at any police station irrespective of the crime jurisdiction area. The Delhi Police has given more liberty in case of filing an FIR.

It can be done online via an email or registered post to the Station House Officer. Recently, many states are following this e-FIR (online submission of FIR) including Tamil Nadu, Himachal Pradesh, Jharkhand, Maharashtra, Madhya Pradesh, Haryana, Goa, Odisha etc.

Only Women Officers Can Arrest Women Before Sunset

Under all circumstance, only women officers can arrest women. In fact, a woman constable should be present in the police station all the time.

Here, the women have got an absolute right to say NO when only male police officers are present for the said arrest. Unless, they get a written permission from the magistrate, a male officer can’t arrest a woman.

No women can be arrested and taken to custody (police station) between 6 PM and 6 AM.

No Detention Beyond 24-hours

No person can be detained for longer than 24-hours after the arrest. He or she has to be produced before the Magistrate or Judicial Authority. The Preventive Detention Act 1950 protects the accused from being trapped into wrongful detention.

Domestic LPG cylinders usage come with 40-lakh insurance coverage. In case of any unfortunate event due to cylinder explosion, the LPG consumers can inform the concerned gas agency to complete the formalities of Third-Party Liability insurance for getting compensation.

One can Drink Water & Use Washrooms at Any 5-Star Hotel

As per the Indian Sarais Act 1867, any person can walk into any hotel, drink potable water and use its washroom even in a 5-star hotel. These establishments can’t deny your entry for use of restroom facility.

Under New Adoption Regulations 2017, a single male and live-in couples can adopt a girl child. The couples should have at least 2-years stable marital relationship.

Moreover, the minimum age difference between the child and adoptive parents shall not be less than twenty-five years. Post 55 years, adoption is not allowed.

Live-in Relationship is Not Illegal

It’s not a crime to live together. The live-in relationship and even the newborn is considered to be a legal child and thus have the full right in the assets of his/her father.

There’s no law that prohibits the unmarried couple from staying together in a hotel across India. It’s neither illegal nor a criminal offence. When a live-in relationship between two adults is not an offence, the sharing of a hotel room is totally legal.

Driving under the influence of alcohol is considered to be a criminal offence. As per the Section 185 of Motor Vehicles Act 1988 and 2019, if the driver’s alcohol concentration exceeds 30mg per 100ml of blood in a test by Breath Analyzer, he or she can be levied a penalty of ?10000 and or six months imprisonment.

Driving under the influence of alcohol is considered to be a criminal offence.

No Penalty for the Same Traffic-Related Offence till Mid-Night

According to the law, a SI or higher ranked officer has the right to demand your vehicle papers. You can’t be fined multiple times the same offence till mid-night.

For example, riding without a helmet will attract ?1000 penalty. If you are caught again for riding without helmet on the same day till midnight, you don’t need to be fined again.

Similarly, if there’s any surgery up from the neck, helmet wearing is not mandatory.

No Company can Terminate a Pregnant Woman Employee

As per the Maternity Benefit Act 1961, no company can terminate a pregnant employee if she has worked for more than 6 months at the same place.

If an organization employs more than 10 persons, the female worker is entitled to get 12 weeks of salary and a medical bonus of ?3500 rupees. The recent Maternity Benefit (Amendment) Act 2017 has increased the paid maternity leave from the existing 12 weeks to 26 weeks.

No Mutual Divorce Before 1-Year Period

The divorce petition cannot be registered within a year of marriage. That’s the reason, to apply for a mutual consent, the couple must have lived separately at least one year. Only in some dire cases, the court can grant divorce within 6 months.

As per the Section 12 of the Legal Services Authorities Act 1987, every woman is entitled to get free legal aid in civil and criminal matters. An advocate can always be accompanied to ensure access to justice.

If the person wants to get free legal services then one needs to approach legal services institution. One can even apply it online at NALSA’s website.

It’s to be noted that daughters had a right on the father’s property under The Hindu Succession Act 1956. The new addition of inheriting the ancestral property comes with a landmark judgement.

The Supreme Court ruled in favour of daughters that they will have an equal birthright to inherit the ancestral property of their parents.

As per the Police Act 1861, a police officer is always on duty. This is irrespective of whether he/she’s in uniform. The police personnel can’t give a lame answer that he’s not on duty.

In fact, some states like Karnataka police should always be in uniform (no casual dress) during duty hours. This includes visiting the scene of offence and addressing the media.